At the beginning of this year, on the 23rd of January to be precise, the title of my post was: Back on deck.  Well, that didn't last long, because just then my husband passed away under tragic circumstances and of course, I was devastated.  Miniatures did no longer appear on my horizon for a long time, other than preparing and tutoring workshops at our Brisbane dollshouse club.  I felt obliged, because I was, and still am, workshop convenor.

In a way that was good, because it kept me going and it kept me interested to a degree.  At the moment I am still battling depression because of what happened, but I have finally taken the step to get back to my miniatures.  It will keep me distracted and that is what I need.

Since back then I was working on the Florist I decided I will keep going with that for a while.  It's a bit difficult at times, because I needed to finish and place the stairs and they were made for me by my husband...  I guess these things will happen from time to time (as they happen in other areas as well), so on with it and get them painted.  I am not sure I will leave the white parts as they are, but I can ponder about it.  In the meantime there are other objects that I can concentrate on.


The original plan was to have this fantastic bouquet of flowers in the window as a show piece for the shop.  Well, that will no longer be possible, because over time something unfortunate happened with the bouquet.  As you know, most of the flowers we miniaturists make are worked on florist wire: metal.  For some reason or other, it may be the 'clay' in which they were stuck, the wire had started to rust through and broke off.  So, after a while all my flowers were lying on the ground....  The only solution I can see at the moment is to gather all the flowers and the big vase and put them in the 'work area' where somebody is arranging a beautiful bouquet!

I wanted to start something new too, so I made a blackboard to advertise the flowers outside the shop.  As this is a shop with a lot of Dutch flowers and a Dutch feel about it, I have decided that, yes, it has an English name, but...... I want it to be a flower shop somewhere in the Netherlands. ;-) 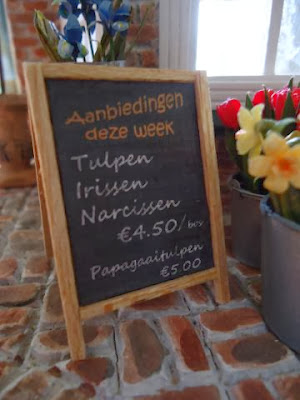 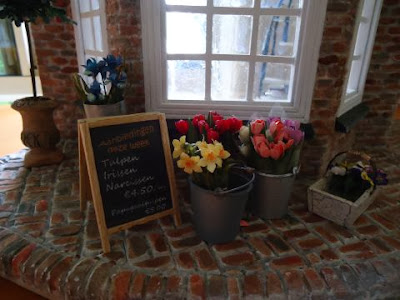 So close to Christmas with all the goings on of break-up parties etc. I don't know if I will have a lot of time to consistently work, but I aim to do so.  So, hopefully, see you soon again.  In the meantime I will think of what I will add next...

Thank you so much for stopping by and leaving a comment.

I appreciate your friendship.

However, comments with the purpose of (hidden) advertising will not be considered genuine and will be removed.

Marion
Bribie Island, Queensland, Australia
Travelling, geocaching and miniatures are my passions in life, therefore I have various blogs on which I like to share my stories with you.